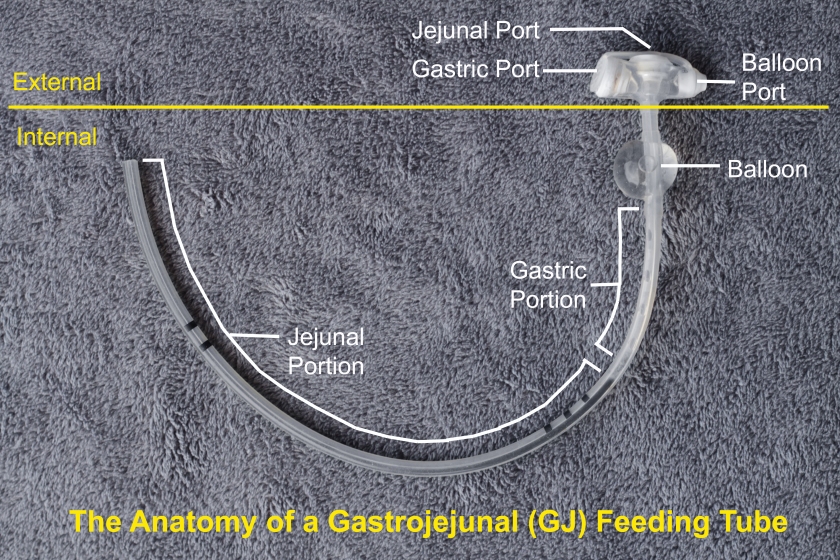 I’ve experienced this for a long time, but several years ago I met a doctor who really brought into focus what the problem was.  It’s one way ableism can turn deadly, but you can’t always catch it because it sounds almost like normal medical advice.

Anyway, I had two separate and unrelated problems.

One, the part of my tube that went into my intestines was rubbing on an ulcer right over a blood vessel, so a lot of blood was coming out of the tube.

Two, a giant nasty abscess had appeared on my stoma practically overnight.  Like one day it was a red spot, the next day it looked like a blister, the next day it was this giant two-inch monstrosity that had popped in several places and was oozing pus everywhere.  To make matters worse, it appeared to have a hole that opened deep into the stoma, so that stomach fluid flowed into it, making it impossible to keep clean.

I was seeing a surgeon to see what, if anything, he could do about the abscess.  Which, at this point, had been there for two months.  (Antibiotic scripts were being mismanaged which made it last far longer than it needed to and in potentially dangerous ways, according to the infectious diseases specialist I finally managed to see after four months of this.)

“I can’t do anything.  Even if I could get rid of it, you’d just get another.”

This seemed like an odd statement to me.  I’d had my tube for years and never had more than minor skin complications.  I got compliments all the time on how well I took care of my stoma.  This was the only time something like this had happened.  And even if it was likely to happen again, that seemed like no reason to allow a giant painful disgusting infected pusball to fester indefinitely and get worse.

But I realized this wasn’t just his considered professional opinion when I mentioned offhand that I was soon going to get surgery to insert a separate J-tube to replace the GJ-tube and get rid of the ulcer.

“I don’t see the point in that.  Even if you make one ulcer go away, getting a new tube in a new spot will just rub somewhere else and create a new ulcer.”

That’s when I realized a pattern.

And the pattern wasn’t that he actually would have said this under ordinary circumstances.

The pattern was he had already written me and my situation off as not just unfixable, but there being no point to fixing it.  Then he wrote off any problems as inevitable and likely to recur.

I’ve never gotten another abscess so far.  It’s been years.

I’ve never gotten another ulcer so far.  It’s been years.

But even if I did, those aren’t things you leave alone if you want to live.

And that’s the thing.

If you have a feeding tube, some people see you as half-dead already.

If you have a developmental disability, some people see you as half-dead already.

I knew a guy with a developmental disability who had to go to the emergency room for a bad infection.  His communication system was limited to actions, facial expressions, and seven signs in sign language, he had spent most of his life in a state institution, he was brown, and he was a ward of the state.  That makes him an unperson to most medical professionals.  They told his staff, “He won’t live out the night,” without even examining him.  Then they tried to walk out without ordering treatment.  She had to scream at them to get him basic, simple medical treatment that would’ve been given to anyone else. He got it, he got over the infection quickly.   This was at least 15 years ago and last I heard he’s still alive.

I’ve gotten it more times than I can count.

A relative has a lot of health conditions (many of which run in the family), and at one point was told there was no point in treating them because she was in her late sixties at the time.  This meant to the doctors that she was likely to die soon anyway so what was the point?  She had to argue that her female relatives often live into their nineties in order to get any medical care at all at times.  That is not something she should’ve had to say.  Her medical decisions matter no matter what the average lifespan is.  She was facing a combination of age discrimination and ableism (some of her conditions are rare and complicated and they didn’t want to put in the effort of learning, and I’m sure there were assumptions about quality of life and better off dead anyway in there).

This means that in actual situations where I’m trying to do a risk-benefit analysis, it’s very hard for me to trust that the information I’m getting from doctors is accurate.  Because there are situations where it really is not worth intervening to deal with something that’s gonna come back anyway.  Where the treatment is more damaging than the condition.  I have a few of those (including one where the condition is harmless but unslghtly and the treatment is painful and risky, for example).  But when doctors act like that’s the default situation, it’s extremely hard to know if they’re telling you the truth or not.

And in the wrong situation it can kill you.  Or lead to lots of work and unpleasantness and illness that could be totally avoided.

Feeding tubes are definitely one area where this happens a lot.  Many doctors don’t really know a lot about feeding tubes, assume complications are the norm, and assume that anyone with a feeding tube has no quality of life worth preserving by keeping us alive anyway.  That combination means they’ll assume any problems are automatic and inevitable consequences of having a feeding tube at all.  That any complications shouldn’t be fixed.  Either because they’ll come back right away or because they can’t be fixed at all.  And that there’d be no point in fixing anything because why prolong or improve the life of someone suffering as badly as someone with a feeding tube anyway?

These are all potentially fatal assumptions.  Fatal fatalism, I guess.  If you have any kind of unusual medical equipment or conditions.  Or if you are in any way not valued by the medical profession.  Especially if you’re not valued in a way that makes them think of you as dead, half-dead, terminally ill, socially dead, better off dead, or just waiting to die. Then watch out for this like a hawk.  Always think of the ear infection analogy.  If you weren’t better off dead to them, would they treat this?  Do they repeat this advice no matter what your actual problem is?  This is not valid medical advice, this is prejudice dressed up as medical advice.  And it’s an excuse not to treat you.  And it could kill you.  So be careful.

Hufflepuff. Came from the redwoods, which tell me who I am and where I belong in the world. I relate to objects as if they are alive, but as things with identities and properties all of their own, not as something human-like. Culturally I'm from a California Okie background. Crochet or otherwise create constantly, write poetry and paint when I can. Proud member of the developmental disability self-advocacy movement. I care a lot more about being a human being than I care about what categories I fit into. View All Posts

Comment here. Please remember you're a guest here just as if you were a guest in my house, and try to treat me and other commenters accordingly. Comments are moderated and may take time to appear. Cancel reply