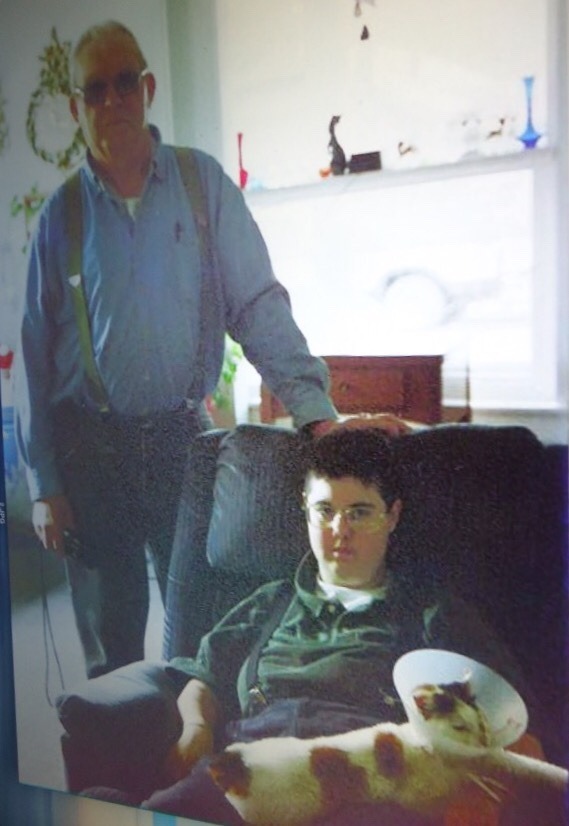 This is my Uncle Lindy. Great-Uncle Lindy to be exact. He’s my mom’s mom’s brother. I just found this photo again so I thought I’d post it. My brothers and me always called him Uncle Lindy even though he was technically our great-uncle. Like many people in his family, he was long-lived.

He lived with my great-grandma until she died. She was in her nineties. I was about twelve. He took care of her so she could live in her own home.

Whenever people talk about respecting traditional family values, I think of that. In our family it is normal to move in with a disabled relative if they’re in danger of institutionalization. Some people in our family prefer to put relatives in nursing homes, but most don’t. Whatever else we all disagree on, most of us seem to agree that people belong at home and that we have some responsibility in making sure they can to the best of our ability.

I think about that a lot because that’s a value of both the family I was born into and the family I have acquired along the way. And Uncle Lindy showed it by what he did, not what he said. I never talked to him about it, I just saw how he treated his mom, and that’s how I learned you don’t put relatives in nursing homes. That’s a real traditional family value I can get behind, although I also think family members should have a lot more support than they usually do when they make decisions like that.

I want to tell you a bit about (Great) Uncle Lindy because he’s very important to me even though there are ways in which I barely knew the man.

Uncle Lindy lived with my great-grandma in a tiny house. Tinier than my apartment. There was a long thin kitchen that was a tight squeeze even for a child. Then one tiny bedroom and an equallly tiny front room that doubled as a living room and my great-grandma’s bedroom. I think it must’ve been a fold-out couch, but I remember a bed taking up most of the room and her lying in it most of the time as she got older. She had a voice almost too small to hear.

There were stories about Uncle Lindy’s generosity. He never bragged about it. You heard these things from other people. But things like, someone came to his door who didn’t have shoes, and by the time he left, Uncle Lindy had given him his shoes. He was the same way with animals — dogs and cats came to his door wanting food or needing medical attention, and he gave them both. If they stuck around, they became his pets. He wasn’t an animal hoarder — they were clean and he took proper care of them. He was just someone who loved animals and gave them everything he could. He also hiked fish into mountain lakes in his backpack.

I would be sitting there interacting with some of the animals. And he would be there, or not be there, as the case may be. Sometimes he’d go off and take care of other things or talk to my parents. Sometimes he’d just quietly hang around me and the animals. I’m sure he must’ve talked to me about something at some point, but I don’t remember a single conversation. Conversations were certainly not the focus of our visits.

Also, it’s not quite as obvious in the photo as in real life, but behind me and Uncle Lindy, the windows are lined with glass shelves. And the shelves are lined with beautiful glass items that are great when the light shines through them. Little knickknacks basically. Vases and tiny sculptures and dishes.

Anyway, the light shines through all of those things, and it’s beautiful taken as a whole. He must have collected those.

Swedish decoration style involves a lot of ways to use light. There’s a lot of the year in Sweden where there’s not a lot of light at all. So Swedish house decoration often involves a lot of pale colors and other ways to make whatever light you’ve got count for a lot. I wouldn’t be surprised if Lindy’s beautiful knickknack collection, which captures the light coming in the window and makes the whole room sparkle with colors from the glass, has something to do with this. Swedes are often experts when it comes to making a little sunlight go a long way, and I wouldn’t be surprised if his mom took this expertise with her on the boat to America.

Also, we weren’t planning on dressing similar and having the same haircut that day, it just happened.

That was the last day I ever saw Uncle Lindy. I was in Oregon visiting my grandparents for the first time as an adult. I discovered that I liked Uncle Lindy a lot. So it wasn’t just bad discoveries on that trip, which is good because I’d also discovered the same day exactly how much I disliked my grandfather. But I discovered I liked Uncle Lindy just as much as I disliked my grandpa, so it evened out. (Both of them had to do with cats, too. My grandpa was proud of having hurt cats for fun. Lindy helped cats and never made a big deal about what he did. You can see one of the cats he helped in the photo, complete with Cone of Shame from recent eye surgery.)

Anyway, that’s my Uncle Lindy, and I miss him. He died shortly after one of the few relatives who does believe in nursing homes, had him put in one, away from his pets. After all Lindy did to keep his own mother out of one for decades (she ended up in one towards the very end, but he did his best), this seemed horribly unfair.

But what I remember the most about him is the way he cared about people, whether two-legged (human), four-legged (cats and dogs), or no-legged (fish). And he never talked about that, to my knowledge. He just did it. But what he did showed enough of his character, you didn’t have to talk to him to see it.