If it’s important, put your hat on.

Before any important meeting like a parent-teacher conference. My dad could be found by the door endlessly adjusting his hat, just like this. Hats are important both to Okie culture in general and my dad personally.

Towards the end of 2014 was also the end of my dad’s life. He died at home. In his last few weeks, he couldn’t speak anymore. I was too sick to travel all the way across the country and into my parents’ house in the middle of the mountains. So I was the only member of our immediate family who couldn’t come to see him in person. And I couldn’t speak either.

We’d been doing video chats on Skype a lot. He’d talk, and I’d type, but mostly we just hung out and loved each other. But now neither of us could talk and he couldn’t type either.

When he became unable to talk anymore, my mom set up their laptop on my dad’s hospital bed, and started Skype video chats for us. Instead of talking or typing, we just stared at each other, and loved each other. And that’s how we said goodbye.

I never knew there were any photos taken at the time, but during the hospital stay after I broke my back a second time, my mom sent me this photo of me and my dad Skyping. I’m really glad to have these memories. I’m really glad we had the chance to say goodbye. I feel amazingly lucky for that.

When he died, he sent me a chunk of his beard hairs. (When I was little, he always let me play with his beard and his loose skin.)

I have been wearing those in floating lockets ever since, and they’re really beautiful. Photos don’t do them justice. But I’m able to walk around with a piece of his beard worn as jewelry every day. My mom sent some more beard when I was in the hospital, because somehow in the lead-up to the hospital stay I lost my other locket, and my spare beard hairs are in a drawer somewhere inaccessible to me right now. So when she sent the other beard hairs, I was able to put them in a new locket. I’m equally grateful to have something physical and tangible to remember him by any time I want to. Beard hair is more durable than memory sometimes.

And I’m really glad to have a father who understood how much can be said without saying it, who knew how to communicate using objects, and who spent his last days doing his best to love as much as he possibly could.

I’m late for Memorial Day, and I have no new posts on it planned to make, so this is it. But I made old posts. So for Veteran’s Day and Memorial Day, I always remember America’s atomic vets. I have at least one in my family — he died from the experimentation he was subjected to by the military — and until I heard his story, I’d heard of this kind of thing but had no idea my grandpa’s cousin was involved in what I’d thought of as just another part of history. And that’s the thing: History is made up of people. Every single one of us is history. That’s important. And it’s important that we understand where we and our families and friends are part of history.

US Army troops in Nevada, training for nuclear warfare.
These troops are about 6 miles
from Ground Zero. The Pixley Farm was about 120 miles away.

My father wrote this in his memoirs about living in the San Joaquin Valley on a farm called Pixley Farm during that time period, which meant Nevada where the nuclear testing happened was right over the other side of the Sierras:

In the early 1950’s, everyone was afraid of the communists, Russia and China in particular. In 1949, the communists took control of China and Russia exploded its first atomic bomb. Russia was supplying arms, ammunition, aircraft and tanks to the North Koreans and China. China joined with the North Koreans to fight UN troops in October of 1950. The mood in the United States was one of near paranoia. It seemed that war with Russia was inevitable. The specter of WW3 loomed on the horizon. It was at this time that Senator Joseph McCarthy began his famous communist witch-hunt. He contended that there was “A Red under every Bed”. The United States engaged in extensive Atomic Bomb testing in Nevada. From our vantagepoint on the farm, the flashes of light from the tests lit up the sky behind the Sierra Nevada mountains. Following the flash of light by a couple of minutes, we were jarred by the shock wave. The roar of the blast came many minutes later. It was an eerie experience. On one occasion, just before sunrise, I was helping Dad set siphon pipes when we saw the flash. We hung on to the pickup until the shock wave arrived. When it hit, it was so strong that it sloshed water out of the irrigation ditch. On another occasion, I was knocked out of bed by a shock wave. Atomic bombs were fearsome things to a nine-year-old kid. (They are fearsome things to a 66-year-old.)

This is the part where my dad talks about meeting the atomic vet in my family, who eventually died as a result of the radiation:

One afternoon, I came home from school and there was a strange man in the living room talking to Dad and Mom. He was one of Dad’s cousins and was home on leave from the Army. I sat and listened with wide eyes as he described his participation in the atomic bomb tests in Nevada. He along with many other soldiers had sat in a trench one mile from ground zero. They had dark goggles and ear protection that was their only special equipment. The bomb sat on a tall tower. They were told not to look at the tower or to raise their heads above the edge of the trench. When the bomb went off, Dad’s cousin saw a blinding flash, and was thrown backwards against the trench wall. He said that the blast was deafening and that a sheet of hot sand whistled over his head. We talked for a while and then he left. I never saw him again. Six years later, in 1958, I heard that he had died of leukemia.

I made a more detailed post on atomic vets awhile back, called America’s Atomic Veterans, if you want to read it.

I think it’s important to remember not only the soldiers who died in foreign countries, but also the soldiers who died right here in America. They died without volunteering to be experimented on by their own government. The government considered them expendable. Just human guinea pigs to see what the bomb would do to them. And while we’ve made progress, neither the living vets nor the people who died have been properly compensated for the mess created. This isn’t a partisan thing, and it’s not about whether you approve of the military or not, this is just messed up what happened to people.

There’s very little he’ll leave alone, if given the chance.

But the more I think about it… I like having a memorial shrine, I will put it back together again, but the cat will knock it over again unless I buy some museum putty or something, which I’m not sure I’m willing to do.

And the more I think about it, the more fitting it is that my dad’s things are sometimes all over the house, reminding me of him in everyday life.

I sleep with his rocks in my bed.

I wear his clothing.

I find things he owned everywhere.

I use his tools.

I’ve said before that objects are my best form of communication.  With my father, this is true.  All of his things don’t just each remind me of him. Each one had a specific relation to him.

Taken together, they point back to who he was with the precision of a laser beam.

And they will do that whether they are properly arranged on the shrine or scattered everywhere by the cat.

And I love remembering my father.  I love finding him in my current life, in who I have become.  I love relating to him in an ongoing way even though he is dead.  Because who he was can’t be erased and his influence on the world still exists and will always exist.

I don’t idealize him the way some people do when someone dies, though.  I remember the worst parts about him.  But I don’t feel like I’d be remembering him if I did otherwise.  It would feel like an insult to his memory to turn him into an image of something he never was.

But I also don’t feel the horrible feelings most people expect with grief, for the most part.  I feel like he is still in my life, just not present.  His things remind me of who he was, and his influences and actions ensure he’s still around in everything I do.  I still have an ongoing relationship with him.  Most of the time I remember him with joy.

Bottom line is, I love my father.  And maybe sometimes overzealous kittens make you put things in perspective.  Remembering my father is not confined to one part of the house, it is integrated into my life.  Memorial shrines are a good thing, don’t get me wrong, but having them disrupted can make you think. 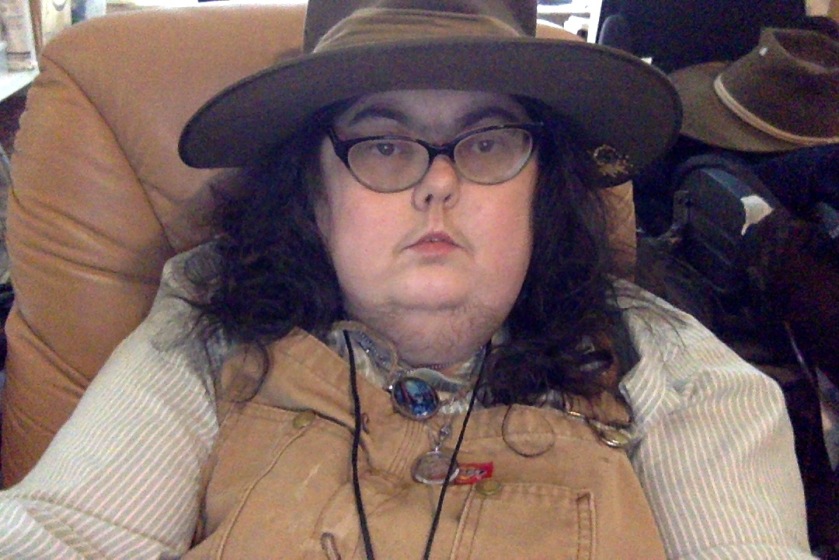 People react a lot to my hats.

Maybe it’s because I’m in Vermont.  I don’t know.  People come up with a lot of weird meanings for my hat.  They think it’s a cowboy hat.  Or an adventurer hat.  Or some kind of costume.  It’s not any of the above.  It’s my father’s hat.

My father always wore a hat.  But he wore them for different reasons.

One of my favorite memories of my father and his hats was the way he’d wear it when he was headed out to do something important.  He might still be wearing his usual jeans and shirt, but the hat meant things were important and he was dressing up.  You could tell by how deliberately he put it on.

And he wore these hats as if the hats grew out of his head.

When my father died, he sent me a lot of his hats, and a lot of his shirts and suspenders.  I began wearing his clothes, or his style of clothes, every day, including his hats.

People told me for the first time in my life I looked comfortable in my own skin.

It wasn’t a conscious thing.

I started feeling more connected to him.

But then I always connected to the world well through objects and the connections between them.

And, it turns out, so did my father.

I continue to discover him inside of me in ways I could’ve never imagined.

I continue to discover the things he has passed down to me without word or instruction.

And those things, that love, are the most valuable things of all.  They form connections and bonds between people.  They’re important.

People are often taught to view clothing as superficial and vain.  To view objects as just meaningless dead things.  But clothing can tell you a lot about where you come from.  It can connect you to your roots, however loving, uncomfortable, and complicated those roots might be.  It can be a reminder of who you really are.