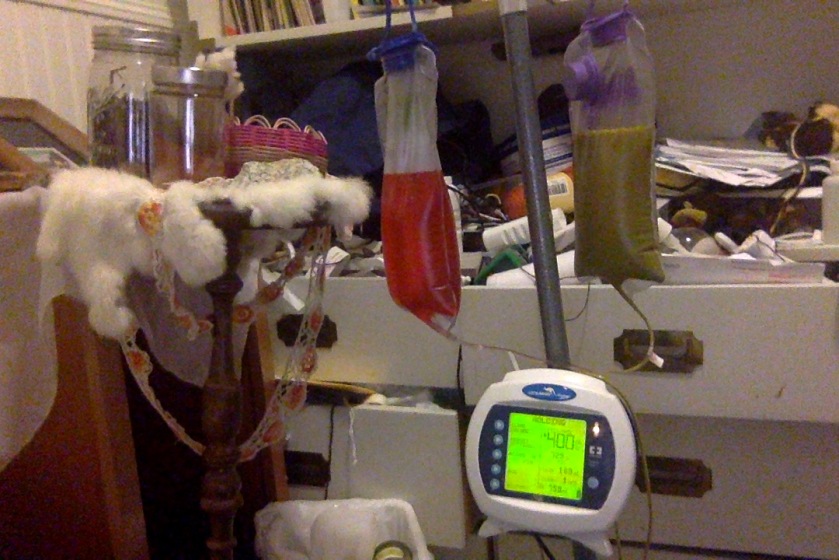 I haven’t hit on exactly the right foods to eat, yet, or maybe the right amounts.  But what I’m eating is both so much better for me than the Nutren was, and feels so much better, that I wanted to tell people what my current set of foods generally looks like.  Note that I am not telling anyone else what to eat — what food works for someone varies so much by person, culture, and circumstance that I’d never presume to tell anyone else what they ought to be eating.  Plus it’s much healthier (and happier) to not worry about food too much than to spend all your time freaking out about whether you’re eating the ‘wrong’ kind of food or not.

So there’s several elements that go into most meals.  I don’t eat the exact same thing every time though.  I sort of have an overall category, and then I can pick and choose what I want from within that category.  So generally my food looks like this.

Food (combo of something from each category put into high-powered blender with water, then chinois, then feeding pump):

We started calling certain vegetables texture vegetables because at first we were so focused on getting me enough beans, that the texture of the resulting soup felt and behaved like cement once it got into my guts.  So we found that adding squash or sweet potatoes got rid of some of that cement quality.  Not that that’s the only reason I’d eat squash or sweet potatoes, but that was definitely the original purpose they served.

Anyway, while this is far from perfect, it’s so much better than eating Nutren, and I’m satisfied with it more or less.  I also like that unlike Nutren, I can vary foods within each category very easily.  So I get more of a variety in my food than I did on Nutren.

I’m not a vegetarian and have no desire to become one.  But my food ends up being mostly vegetarian for a couple reasons.

One is just that I prefer vegetarian foods most of the time.  Not for ideological reasons, but I just like it better than meat.  With notable exceptions usually involving hot pastrami sandwiches.

But I do use meat or animal products in limited ways.  Like I’ll fry mushrooms in fish sauce.  And if there was a nutrient I was missing that’s most easily found in animals, I would have no problem supplementing with an animal product to get that nutrient.

Also, I do like my food to taste good.  I always make sure that the soup (what I call the resulting liquid that happens after you put all these ingredients in water in a high-powered blender and then strain the results through a chinois) is seasoned in a way where I’d want to eat it even if I was eating it by mouth.  Bonus points if I can convince people with functioning stomachs to eat it on purpose.

I swear that matters.  It matters that the food smells and tastes good, even if I never smell and taste it beyond the taste test at the beginning.  I don’t know if that has any medical benefit, but you don’t just eat food for the medical benefits.  You eat food because you like it.  And making my food enjoyable really frigging matters.  It matters for both disabled and nondisabled people:  You should like what you eat, when possible.  And that shouldn’t have to change just because you’re fed through a tube.

One thing that I really hate about being tube-fed is the fact that my food is treated as a medicine and eating is completely medicalized.  The Nutren is listed in my medical file as medication, not food.  Regulations state that I  need a note from my doctor to allow Howard Center staff to put blenderized food into my feeding tube.  Which has to do with the nurse being able to keep her license — she finds this all as absurd as I do.

When I’m in the hospital, how I get water or coffee has to be written up by doctors.  If I disagree, I am not technically allowed to, say, vary the timing of water flushes during tube feeds.  I have to argue with a doctor about water because it’s suddenly a medical treatment rather than just drinking water.  And I have no medical reason for fluid restriction, so they don’t even have that excuse.  It’s entirely because the water goes into a tube rather than into my mouth, even though it’s getting to the same place in the end.

Anyway, one of the biggest antidotes anywhere to seeing food as medicine, is to prepare the food for the blender in the same way you would prepare an actual meal.  You want it to taste good, or smell good.  You want it to be something you’d be willing and even eager to eat if you were eating it orally.  These things aren’t trivial or afterthoughts.  They’re a serious and overlooked part of being tube fed.

I don’t think it’s generally a good idea to ignore this and pretend like your food is a some kind of laboratory experiment.  There’s nothing wrong with eating a feeding formula if that’s what works for you, but if it doesn’t work for you, or you’d just rather for whatever reason use blenderized food?  It’s important where possible that the food be enjoyable and not just a chore you have to get done.  Or at least, that it not be actively unenjoyable.  Food is not just physical or medical.  It’s emotional and cultural and lots of other things.  You ignore that at your peril.

Anyway, I’m looking forward to my nightly tube feeds instead of dreading them like I used to.  That in itself is a good sign.  In the end it doesn’t entirely matter (except between me and my doctors) why Nutren made me so physically miserable and the food I’m eating now doesn’t.  What matters is that I’m eating food I enjoy and that I seem physically much healthier this way.  And that I’ve found a way to make it work even with a feeding tube.