Skip to content
This post is part of the Weave of Tradition series.  Please read the introductory post to that series to understand more about this post’s intent and context.  This series deals with traditions, language, and symbols that mean very different things to different people.
When I first tentatively described myself as nongendeered, I did not dream there would be so many words for this in the future that I wouldn’t quite know what to do with them all.  So these word preferences are entirely personal, and should not be taken as telling anyone else to feel about different words or what to call yourselves.
This is mostly one of those posts that’s a little boring to me:  It’s more posted for reference purposes for later posts, than for any other reason.
So here are some of the words for genderlessness and related concepts, and how I feel about them.

This is the word I came up with for myself, when I first came up with a word.  At the time, I viewed cisgenderedas meaning that you had a gender identity that matched your biological sex, and transgenderedas meaning that you had a gender identity that did not match your biological sex.  So I came up with nongenderedby contrast:  It meant that you simply didn’t havea gender identity.  And therefore it couldn’t possibly match or not match your biological sex, because it just flat-out wasn’t there.
You can say all you want about my understanding of gender at the time, but that’s where it stood, and that’s my first clumsy beginnings at articulating what I was really experiencing.  So it holds some kind of place in my heart regardless of everything I don’t like about it.
But I don’t like it at this point.  Among other things, it’s clunky.  It just isn’t easy to say or to read.  It doesn’t work for me when I have better options.
But I do like that it’s never really caught on.  When words for genderlessness catch on, they have a habit of acquiring gendered qualities.  I don’t know why.  Maybe because they acquire second meanings that basically refer to various nonbinary or androgynous genders (sometimes specific ones, sometimes just in general). This one, at least, never has never done that.

I really don’t like this one.
It seems to be a complicated subculture, at once a gender of its own and no gender at all, sometimes nonbinary and gendered, sometimes genderless, sometimes both, sometimes neither.  And that’s fine for anyone who feels comfortable under that umbrella, but to me it just sounds like a social and linguistic nightmare.
Also, it’s hard to say.  I don’t know if it was originally French and later used by English speakers, or whether it was always just borrowed from French into English.  But it’s a very specific kind of French word that is hard for even someone familiar with French to figure out how to say in an English-speaking context.
So basically, I know exactly how to say neutrois in French.  That’s not hard, there’s only really one way it can be pronounced.
But when a word using those particular French sounds is borrowed into English, it isn’t always pronounced the same way it would be in French.  The French R sound doesn’t exist in English.  So usually a word like this would be approximated by a W sound instead.  So in English, it would sound like: noo-TWAH.  Which sounds, to an English speaker, very close to how it’d be pronounced in French.
Except that it isn’t actually the same, so it’s confusing.

I don’t like the word itself any more than I like the word nongendered.  I find it clunky and off-putting.  I see that it’s supposed to mirror asexual, and it does a good job in that regard.  I just don’t, personally, like it.
I’ve also gotten to watch the term evolve over time.  And there was a time when it meant roughly what I mean by genderless, and it still does mean that for a lot of people.
But it’s acquired a second meaning that feels like it is a gender in and of itself, even with some unspoken rules about what falls into it.  And there’s a specific kind of androgyny often associated with it.  And that kind of androgyny never fits any kind of aesthetic I could pull off even if I wanted to.
And the second meaning makes it harder for me to use it.  I don’t mind that terms evolve, I just don’t feel comfortable within what this term has evolved into.
Unfortunately for my personal preferences, agender has become the most popular term for genderlessness.  If people know a term for genderless at all, it’s agender.  Sometimes neutrois.

Obviously this is what I actually call myself.  I like that it’s a word that can be readily understood and doesn’t look or feel clunky to say.  I like that it just means lack of gender, and has no spoken or unspoken secondary meaning of androgynous, or a specific nonbinary gender with genderless qualities, or something like that.

This is a word that in some cases can technically apply to genderlessness, if by nonbinary you mean any gender or lack of genderother than male or female.
But I don’t actually like using it on myself.  Because nonbinary is a term developed by people with genders, for people with genders, so it doesn’t feel like it fits.  And I am not always comfortable being described this way, although people can use whatever definitions of words they feel ike.

This is much worse than nonbinary. Because it really is a gendered term created by and for people with nonbinary genders. It’s just not my territory gender-wise. And more so than nonbinary, it implies gender, at least to me. Since I lack a gender, it’s just not a comfortable fit.

I definitely feel I have a place in the trans community. Because I believe as long as you’re subject to transphobia, it doesn’t matter what specific category of gender you fall into, you may need the community for survival. And the community has no right to reject anyone who might need it. If parents who throw their trans children into the streets could ever be stopped by “But I’m nonbinary and not going to transition” then I’d take the hair splitting seriously. But as it is, given that membership in the community can mean survival to some people, I find splitting hairs about who belongs there to be a form of extreme and selfish cruelty.
That said, I’m not always comfortable under the transgender umbrella. It comes down to this: All the culture, concepts, words, ideas, etc. in the trans community were created by and for trans people who had genders. So these things all can work wonderfully if you’re in that category, which is most trans people. But I lack any gender identity at all and that means that even when things almost fit they don’t quite.  Like a shirt that fits fine in some places but you can’t wear it because the armholes are so tiny you can’t squeeze the thickest part of your arm through no matter how hard you try.  Except that the “fits fine in some places” part is added to by there being places where it looks like it fits fine the same as on everyone else, but it actually doesn’t fit well at all and may even restrict breathing somewhat, but without anyone being able to see any difference.
So I think genderless people belong having access to the trans community, especially if we want to and are comfortable there.  But I can see why a lot of genderless people would be uncomfortable or not feel like it was the best fit.  It wasn’t made with us in mind, and in some ways was made with experiences in mind that we’re never going to have.  But anyone else saying we don’t belong there has no real standing to do so.  That’s our own call and our own call only, and it can change based on context very easily. 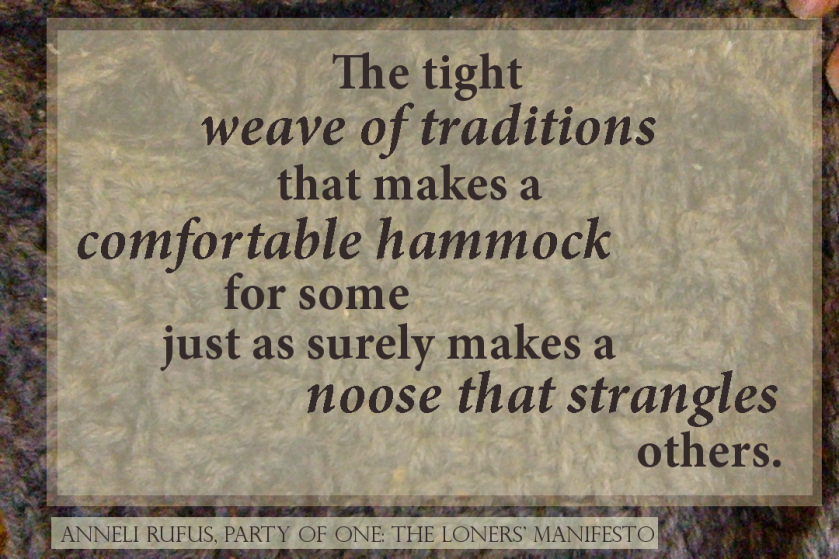 This post is part of the Weave of Tradition series.  Please read the introductory post to that series to understand more about this post’s intent and context.  This series deals with traditions, language, and symbols that mean very different things to different people.

I mean, I love the rainbow bracelets i managed to get, with “LOVE WINS” and that kind of thing.  Don’t get me wrong.  But that’s my acceptable Pride jewelry, and some of it actually makes me vaguely uncomfortable to wear.  But it doesn’t make anyone else uncomfortable.

I know the double-woman symbol doesn’t mean that to everyone who uses it.  But it feels like that meaning to me, so it feels uncomfortable to wear it.  Even as I do wear it.

I happen to love the labrys.  These are the earrings I wore all Pride and continue to wear now:

I shouldn’t have to say this, but for clarity:  I am not a lesbian feminist, a radical feminist, etc.  I believe trans women who are lesbians are lesbians, no questions asked.  I don’t wear the labrys as a statement about anyone else.

The reason I love the labrys is complicated.  But the part that might surprise people:

A labrys has never demanded anything from me when it comes to gender identity.

Yeah, I actually prefer the labrys because it does not impose anything on me with respect to my relationship with gender.  Nothing.  Never has.  People who use the labrys have, sometimes.  But the labrys itself hasn’t.  And contrary to popular belief, the labrys has been popular in many circles that have nothing to do with the ideologies most people associate with it.

Especially when you combine it with statements like “I’m a genderless lesbian.”  But my genderlessness is not ideological or political, it’s a hard-won truth about myself.  it just means I lack any innate sense of myself as having a gender, and always have.  Nothing more, nothing less.

Lesbian is complicated and I’ll probably get into that in a different post in this series.

But anyway, things like this are what this post series was made for:  Words and symbols that mean very different things to different people.  And that being okay.